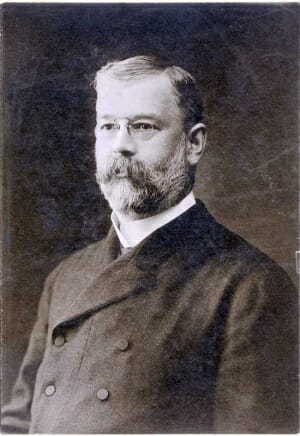 Our founder, Rev. Nathaniel Bertolet Grubb, born in Frederick, Pennsylvania in 1850 had limitless energy and strong conviction. Pastor of the large First Mennonite Church, Philadelphia, he was a popular preacher throughout the Eastern District Conference of the General Conference Mennonite Church up to at least his 86th year. (He preached over 7,000 sermons.)

A man of action, Grubb obviously moved quickly when there was human need, but he also was a man of prayer and contemplation. He was described by a friend this way: “In him is no evasion, but practical Christianity of kind words and deeds, an unselfish and upright life.”

Some of his accomplishments as an innovative leader and organizer include:

Daniel Bertolet (1796-1868) a prosperous local Frederick farmer, brickmaker, and builder was “a man of strong convictions and a very thorough Bible student,” says his son Benjamin.”

In the fall of 1856, Bertolet and other leading citizens of Frederick called a meeting at Isaac Stetler’s store. There they devised a plan to establish the Frederick Institute as a classical day school to prepare men and women for college. A magnificent edifice, the building, and school were the pride of Frederick until the Civil War. Without students, the school closed.

Benjamin Bertolet, son of Daniel Bertolet, worked with Rev. N.B. Grubb to secure the building as the new Mennonite Home for the Aged.

Dreamer and visionary, Rev. N.B. Grubb went out on a financial limb in 1896 when he negotiated to buy the defunct Frederick Institute following a public auction with no acceptable bids. He had no firm institutional backing except the last-minute go-ahead of his own congregation.

Rev. Grubb must have been a persuasive man. Donation of pennies and dollars began coming in from all over the community and all the congregations. Support was so enthusiastic that they ‘quit collecting when they had secured the needed $1,521.50 with only part of the conference solicited.” Meticulous accounts in ledgers, recorded every donation, whether money, two jars of jam, or a basket of turnips.

Without authorization, Rev. Grubb purchased the Frederick Institute; he did, however, have the last-minute approval of the First Mennonite Church, Philadelphia, who promised a solid contribution of $586. Grubb’s friends donated another $154. Purchased for $1,150, The Frederick Mennonite Home opened officially on September 1, 1896, about six months after Grubb’s maverick purchase.

Benjamin Bertolet was chosen as the first president of the Home’s Board of Managers “In recognition of the services rendered in consummating this project.”

“The spirit of benevolence has always been a noted characteristic of the Mennonite Church, and the care of the needy among their number is a cardinal principle of the church, though not always carried out in practice as it should be. The Home of Frederick is an outgrowth of this spirit of charity.” Rev. N.B. Grub, 1897

The first Annual Report was published in May of 1897. The name of the organization was The Mennonite Home of the Eastern District Conference.

“Our conference had previously appointed me a committee to present a plan for the better care of the old and homeless…Presenting several plans which I had thought would give the old people more comfort and less care…Conference did not then see its way clear to accept either of these plans.

Then in 1896 after I had purchased the property I offered it to the conference as a suitable Home for the Aged. At a special session of the conference in March of 1896 the property was accepted.” Excerpt from a speech given by N.B. Grubb, September 15, 1916

George L. Baringer, Frederick’s first resident, signed an agreement in 1896, after he donated $150, “all his property personal and real estate” to the home.

“In the first year, the Frederick family consisted of superintendent and matron Mr. and Mrs. John R. Scheid, and five inmates. These inmates are: Joseph Schimmel, Deep Run congregation; George Baringer, Flatland congregation; Esther Dotterer (a member of the Lutheran church as the time of her admission but since received into the Mennonite church); Mary Keeley, United Evangelical church; Edward Hoffman, First Mennonite Church, Philadelphia.” First Annual Report in 1897.

Timeline of Building and Ground Improvements

1896     The Mennonite Home of the Eastern District Conference  officially opened on September 1, 1896

1993     Auditorium projector and 3 of the stained glass windows donated by then resident, Catherine Krauss in memory of her                 husband Konrad Walter Krauss

2007     Digital Sign constructed and “Live Well With Us” tagline introduced

2007     Flag Pole donated and installed by the residents

2012     Massage Room moved from Aspen to the Medical Suite

2015     Groundbreaking for the Meadows project