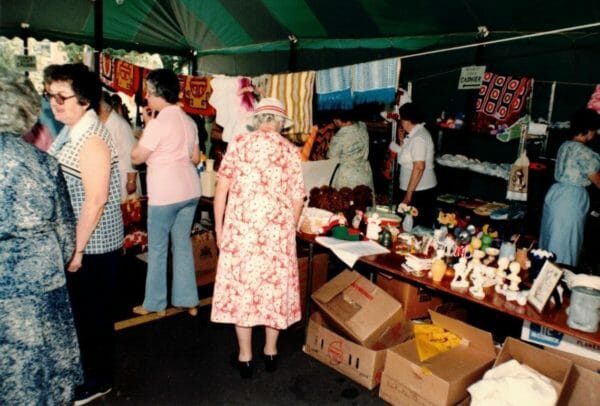 Anniversary Day has involved Frederick’s friends since 1897. It all began one year after it opened its doors. Called Donation Day initially, Anniversary Day became a tradition; its perfect record was broken only in 1943 when the World War II gas rationing forced people to stay home.

The Auxiliary prepares approximately 700 pounds of beef for the roast beef and mashed potato dinner. With the $24,000 and up they raise that day, the women have purchased a Frederick Community bus, quality artwork for the public lounges, Suzuki hand chimes, and wheelchair bowling sets, among other things. They have initiated renovation projects and installed (for $30,000), two Century tubs with special jets and whirlpool action. Though the day now offers more varied activities, people still come for the same components that made it a success for the last 99 years – good food, entertainment, fellowship with a wide circle of old and new friends, and the pride in the Frederick Mennonite Community as “something good that ordinary people made happen.” 1996

For many years the occasion included a well-known speaker, good food, music and fellowship. Community and church supporters visited, mingled with the staff and residents, and enjoyed the grounds by perching on boards supported by sawhorses. Women volunteers from all over the Eastern District churches prepared the food and served two meals.

“The charge of the dinner tickets advanced to $.35. A large canvas was stretched to provide shelter. The East Greenville orchestra discoursed excellent music, greatly enhancing the pleasure of the occasion.” – Anniversary Day 1914

“Anniversary Day was a big occasion for our community. I always went, except for one year in the 1940s there was a polio epidemic, and children were quarantined for several weeks. We didn’t go to school and I didn’t get to go to Frederick. I was so disappointed.” Nancy Hasson Roan, Neighborhood Child stated.